Neurodegeneration: unique and innovative approach to develop a cure

2N Pharma has big ambitions. Our mission is to do what no one has yet managed: develop effective drugs with our innovative approach for the neurological diseases ALS and Parkinson’s.

2N Pharma was founded in 2019 and is based on associate professor John Nieland’s research in neurodegenerative diseases at Aalborg University. His research shows that in patients with neurological diseases such as ALS, Alzheimer’s, multiple sclerosis, Parkinson’s, and others, an imbalance is seen in the way cells generate energy, and over time, this imbalance results in a wide range of problems that drive the neurological disease forward. In 2020, 2N Pharma joined the Creation House Program at the BioInnovation Institute in Copenhagen. This is an 18-month programme in which 2N Pharma received a grant of DKK 10 million. Besides, we received help in developing the business plan. In another mark of quality, 2N Pharma and its collaborators have received a grant of nearly $1 million from the US Department of Defense. This is to fund our work on identifying new biomarkers that can facilitate the diagnosis of ALS.

A novel and innovative approach to target neurodegeneration

Our novel, innovative approach targets an even earlier stage of both diseases. We believe that mitochondrial metabolic dysfunction has a central role in the progression of neurodegeneration. “Almost every cell in living things on planet Earth has these little organelles called mitochondria. In a healthy brain, mitochondria almost always burn glucose. The brain usually gets most of its energy from burning glucose. However, John found that in diseased brains, there is a shift from burning glucose to burning fat. Fat burning requires a lot more oxygen, and that creates a lot of problems downstream. Our hypothesis is that we intervene one step before all those problems occur and the disease develops,” explains Preben Bruun-Nyzell, CEO of 2N Pharma. This is a novel approach to drug development in neurodegenerative diseases.

2N Pharma is now working to raise additional capital and has succeeded in recruiting some experienced board members. One of the new board members is John Kemp. He is Head of Research at the Belgian company Syndesis Therapeutics, which also works in neurology and is in phase 1B clinical trials. Preben Bruun-Nyzell points out that Synderis Therapeutics was recently acquired by AbbVie for $1 billion. ”We expect to achieve the next big milestone in about a year from now. This is the selection of our clinical candidate, i.e., the molecule we will get into the clinic and test on humans. Then the usual regulatory process begins and we expect to be in humans about two years from now.”

Preben Bruun-Nyzell: “In principle, we can be at the same stage of development as Syndesis and be in clinical trials in patients in less than four years. Then you understand what the opportunities are in this area. Both for patients for whom there is no treatment today and for investors who can get a reasonable return on their investment.”

Curious? Contact us or leave a message via de contact form.
Read the Danish text in BusinessReview. 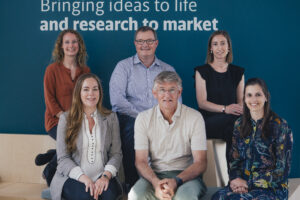